One thing the Wing Authority has picked up during the time we spent in Georgia and the Carolinas is that southerners have a wickedly tasty twist to the classic and sacred Buffalo wing recipe. Ask most wing-lovers in the south how they like their wings and you’ll often hear the same answer: smoked.

That’s not to say that fried chicken wings aren’t found in all manners of southern food joints. But what you’ll often notice in the southeastern U.S. is that some of the best Buffalo wings you’ll find around are sold in barbecue restaurants where the wings share the menu with cornbread and slow-cooked pork ribs.

Take One Hot Mama’s, for example. One of the first restaurants I ate at in Hilton Head, it took me only one glimpse at the list of wing sauce options to realize I was in a place that prided itself on its wings. I ordered Buffalo, among other flavors, and was pleased by how juicy, crispy, and authentically, totally Buffalo these wings were. Maybe next time I’ll even try the ribs.

The wing sauce choices are divided into fried and grilled options, and you won’t find many losers on this list. Of course, we at the Wing Authority are concerned with observing & preserving the Buffalo wing tradition – but that’s not to say that some honey mustard or their super hot “Devil” sauces aren’t worth a try. Be forewarned about that Devil sauce, however. They ain’t playing.

Nice work, One Hot Mama’s. These were some of the most delicious, most reliable wings I found in the lowcountry, and if you find yourself in Hilton Head, do yourself a favor and treat yourself to some of these totally Buffalo wings! 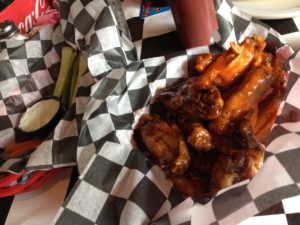 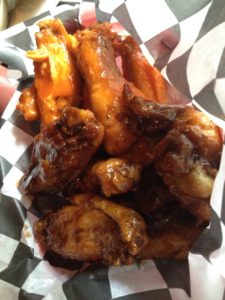 One look at these wings confirms that the all the buzz for TGI Friday’s is correct. TGI Friday’s serves up some reliable Buffalo wings! 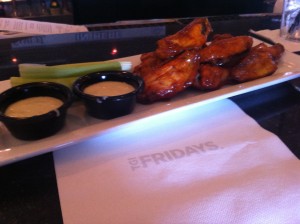 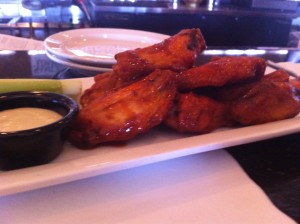 It is well-known among wing-lovers that TGI Friday’s serves some tasty chicken wings. It’s so well-known that someone thought it was a good idea to start selling a frozen version. Oops.

Bad marketing choices aside, TGI Friday’s prides itself on its wings (and I vaguely recall an episode of HBO’s The Sopranos where Tony suggests someone go looking for Pussy Bonpensiero at TGI Friday’s because “he loves their wings”). Not having tried them in some time, the Wing Authority took the opportunity on a recent trip to the mall. TGI Friday’s is not a local pub and it isn’t a greasy pizza and wings joint. You’ll find many TGI Friday’s restaurants near a Home Depot or a Starbucks, but you might also stumble past one in an upscale downtown shopping district. It’s a place that welcomes happy hours but is also suitable for a dinner out with the family. In fact, I must admit – ordering just wings and a beer felt a bit abrupt for the relaxed dining atmosphere. I will give TGI Friday’s credit for creating a nice ambiance without losing its Buffalo wing bonafides.

Tasty wing flavors and creamy blue cheese. The wings were perfectly crispy and juicy. I ordered, the extra hot, of course, and even though they didn’t bring tears to the eyes, TGI Friday’s nailed the Buffalo flavor while ratcheting up the heat. Well done, TGI Friday’s!